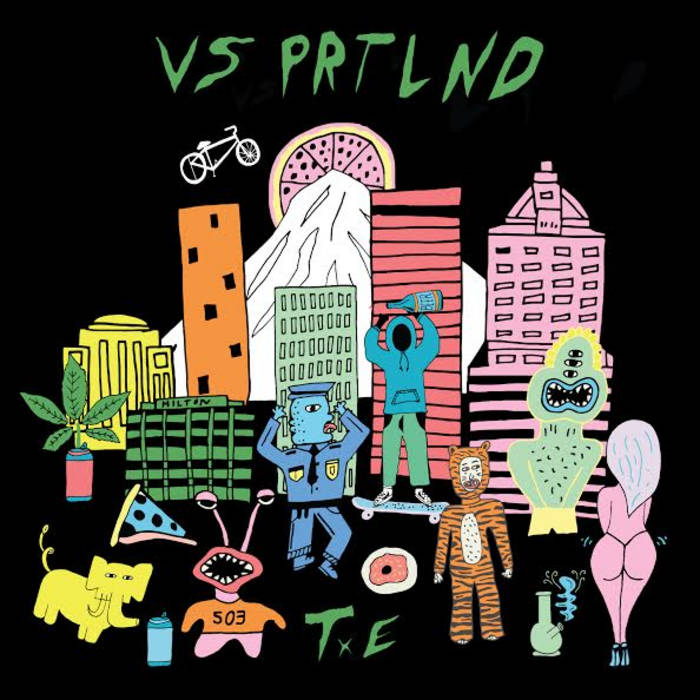 Bloodmoney Perez I love the structure of the beat G_Force did here, and how he flipped the original. And both TOPE and Epp really laid it down lovely on here. Love the Letterman sample too. Favorite track: Hopscotch (Ocean Age).

Aaron Colter Hands-down one of the best hip-hop acts in the Pacific Northwest with enough skill to win over listeners anywhere. Favorite track: This Town (Sallie Ford) ft Vursatyl of Lifesavas.


PRTLND hip-hop trio TxE knows how things work around here. The group, made up of members Tope, Epp and producer Calvin Valentine, realize they’re living in a city where indie rock is king and rap is often viewed as something that only comes from somewhere else. So they’ve decided to do something that surprisingly hasn’t been done before: create an album using samples of songs by some of the city’s most beloved indie bands.

After one listen of the appropriately titled TxE vs. PRTLND, it becomes clear that they were the perfect guys for the job. Valentine is a whiz at adding thudding drums and bass lines to melodic samples, and the gentle piano and guitars of bands like Monarques, Typhoon and Blouse were ripe for his touch. Group MCs Epp and Tope use the beats to spit their usual brand of breezy lyricism, built on nostalgic tales of breaking hearts and drinking too many gin and tonics , adding to lighthearted nature of the project.

Things work especially well when the group decides to pull from more lush material. On “Hopscotch,” Valentine turn a deep synth melody by dream-pop band Ocean Age into something A$AP Rocky would rhyme over, complete with slowed-down vocal chops and a stuttering drum break. "Climb” sees the group turn a soaring Typhoon ballad into a laidback lounge jam that would sound right seeping out of a jukebox in a dimly-lit eastside bar.

At times, things get a little formulaic, as most of the project’s songs follow a similar blueprint of opening with the original record’s vocals before progressing into a looped beat. But subtle touches, like the turntable scratches on “Bitter Sweet” and the group’s carefree banter on “PTTLN,” keep things fun and fresh—two traits fans have come to love and expect from TxE. It may not break down the barriers facing hip-hop in Stumptown, but it should help the community get some more respect, which is all it's really asking for at this point."

Recorded at THE LAUNDRY ROOM - PRTLND, OR

Bandcamp Daily  your guide to the world of Bandcamp